When the puppy suddenly limps…

Who hasn’t dreamt of dogs playing on the beach or running over the fields? Whilst the skeleton of an adult dog is very stable, that of a puppy is just the opposite. High stress can lead to severe skeletal diseases such as hip joint dysplasia (HD) or elbow joint dysplasia (ED). The puppy passport has a prophylactic effect here.

It takes almost twice as long for the supporting, and cushioning muscles to fully grow, compared to the growth time of the skeleton.

Many people long for a dog as a companion. Not only do the nature and quality of the fur, and the warmth of the body fascinate us, but the flexion of the muscles and the harmonious fluidity of movement also attract us.

And not least, the enthusiasm with which dogs express their joy of life. Whoever brings a puppy into the home fulfils a dream.

What if there's an accident...

Dreaming is wonderful. Letting your thoughts roam free, as the young puppy clumsily bumbles along beside you, watching as he plays with other 4-legged friends, or just relaxing and simply switching off.

Then the sudden shock: The puppy comes to you limping and shivering. Many owners would say: "It's not so bad, it will sort itself out", would give the dog a few pats, and send it off to play some more.

"An everyday scene, with a potentially fatal outcome", says Silvia Heitmann, breeder of Australian shepherd dogs, from Flawil. "If a puppy is not examined orthopaedically, after a collision, or even after slipping on rain-soaked ground, a dream could develop into a nightmare".

... one should act immediately

Ms Heitmann speaks from experience. "One day the owners of a 9-month old puppy from my kennel, 'Wildsong', came to see me. I noticed straight away that he was walking unevenly. As all my dogs have A/A hips, I immediately assumed that the puppy had injured itself (probably whilst playing) and that the injury had not been treated".

In fact, according to the owners, from time to time the puppy had been almost unable to move.

But they hadn’t attached any importance to it. "The examination by the vet showed that this had already developed into unilateral hip dysplasia", much to the regret of the passionate dog sportswoman.

"Had my dogs had already been in the puppy-pass program, the problem would have been diagnosed far sooner, and it would never have developed into such serious damage", Silvia Heitmann muses.

Breed and size are decisive

Puppy pass? This has been created by veterinarian Patrick Blättler Monnier, Frenkendorf, based on empirical data collected from the study of dogs’ movement. "The modern dog owner sees in his animal a family member, a sports or even work partner. He would like to keep him healthy and at his side for as long as possible", says the passionate chiropractor and vet specializing in orthopaedics.

"Therefore, the focus of the puppy pass is on monitoring healthy growth of the musculoskeletal system and the stabilization through muscles, tendons and ligaments."

Muscles slower than the skeleton

What is at issue? The growth time of the supporting and cushioning musculature is almost twice as long as that of the skeleton itself. Only when the musculature is fully developed, can it absorb the effects of pressure from the movements.

With smaller dogs the skeleton will be fully grown in eight to nine months, whereas with larger breeds, this process takes longer, during which time the weight gain is significantly higher.

The total weight of bone and muscles and thus the pressure on the skeleton as a whole is thus larger in bigger dogs than in smaller breeds. This favours undesirable skeletal developments in larger breeds.

This is especially true between three to six months when puppies make typical growth spurts.

"The problem is that not all the parts of the locomotion system develop uniformly", says Blättler, adding: "Healthy adult dogs show a load ratio of the supporting forehand to the dynamic, pushing hindquarters of around 60/40. With puppies, this ratio is 50/50 or even 40/60."

This means that, in addition to the dynamic load component, the hindquarters are also taking on part of the static load component. "This has an influence on the roofing of the hip, i.e. the coverage of the femoral head through the acetabulum, which results in an increased risk of development of hip dysplasia." "If this is left untreated, it can lead to arthrosis of the hip, even if the dog was originally classified with A/A hips in the HD evaluation, and therefore judged to be healthy".

In addition to this, many puppies show asymmetrical weight distribution between the left and right sides. "If a puppy shows a lesser burden on the left side of the body, then this automatically results in an overload on the right side." This will result in different stride lengths, but often this can only be detected by very specific motion diagnostics.

"In a recent case in my practice, involving a 12-week old puppy, we discovered that there was not only a left/right load discrepancy, but also a front/back imbalance. He was however able to almost fully compensate the imbalance at the front though the stabilising effect of the shoulder muscles, and with just a 1 cm stride length
difference, the problem was almost imperceptible. But in the hindquarters, where the real drive comes from, the uneven loading manifested itself in a good eight centimetres stride length difference", explains the chiropractor.

But when humans add excessive movement stress to the already uneven loading of the unstable skeleton of puppies, the foundations may well be laid for diseases like hip joint dysplasia (HD) or elbow joint dysplasia (ED). This will be even worse where there’s a genetic predisposition to such problems, emphasises orthopaedist Dr. Blättler. "This is what I have most clearly learned" Ms Heitmann confesses. "The uncontrolled frolicking is at first sight both for the dog as well as the observer something very amusing. But both will later have to pay the bills for the consequences: the dog owner financially, the dog through relieving attitudes, instability, unwillingness to move and pain. 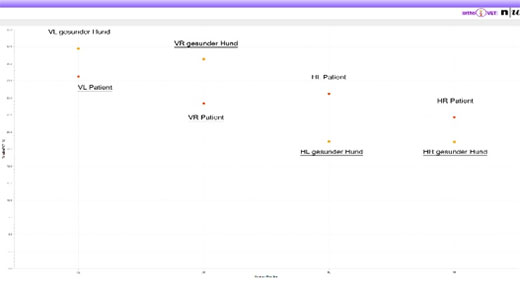 The orange dots show the values of a healthy dog; the red points are the values for the patient showing reduced load of the forehand (AL and AR) and overloading of the hindquarters (PL and PR). 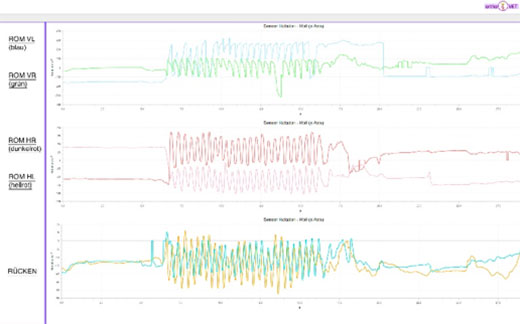 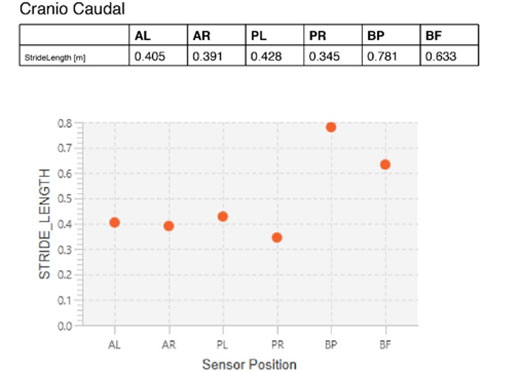 This graph shows the stride lengths at the front and back. Despite the incorrect load, the difference in front is only 1 cm (front left 40 cms, right 39 cms), whereas the difference behind is 8 cms (42 cms back left, 34 cms back right) 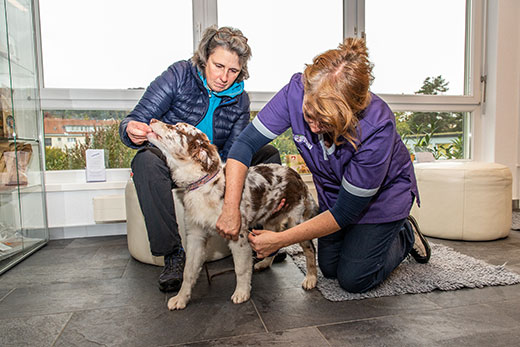 "To prevent this, and since the puppy spends its first weeks at the breeder, it’s the breeders’ responsibility to take on a regulatory role", emphasizes Ms Heitmann. By this she means not only when puppies are at play. "The breeding must be systematically controlled." In order that the breeder could know what his animals may pass on genetically, the HD and ED examination results from the first litter should be studied, before he plans the next litter. "Meaningful values are only valid when the examination results, after completion of growth, for at least 6 puppies from the same litter are compared", says Ms Heitmann. "Therefore, I have a clause in my sales contracts obliging the owners to have their dogs tested and evaluated for HD/ED between 20 and 24 months of age".

Responsible breeders should inform their customers about genetic make-up, and any known movement problems, no matter what the planned role is for the dog, according to Ms Heitmann. "The Australian Shepherd is, like many other races, a working dog for driving and guarding cattle. He needs to have a healthy body whatever he may do, be it as a rescue dog, on the agility course, or as a family pet, if he is to have a chance of a long healthy life".

"The biggest advantage of the puppy-pass, is that the puppy will be regularly controlled during the decisive phase of growth. Misalignment, or incorrect positioning, can be corrected immediately and incipient skeletal changes can be prevented by early chiropractic manipulations", explains Patrick Blättler Monnier.
Therefore, the idea of the puppy-pass is that the puppy will undergo a first examination in the 12th week of life. Thereafter, a further 8 consultations follow at 6 to 7 week intervals until it is 15 months old. An examination includes the determination of the Body Mass Index, a kinematic measurement, an orthopaedic examination and - if necessary - an orthopaedic treatment with kinematic control measurement.

The results are always compared with the values of the previous tests and based upon these, a therapy and development scheme will be drawn up. "Often it is not possible, neither by eye, nor by CT or MRI to tell if a puppy has hurt itself. I've begun to get an eye for it, but with help from the measurements recorded in the puppy-pass details, it is easier to find where the problem lies. Therefore, I am an adamant proponent of the Puppy-pass. Without this precaution. I would have to expect consequential damages. Then it would mean not just chiropractical straightening out of the skeleton, but also uphill running on the lead, avoiding all jumps and ensuring extensive rest periods. The rehab will take a lot longer, is much more expensive, and the dog can may not be able to fulfil the duty originally envisaged for it. 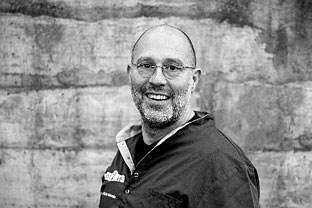 Patrick Blättler Monnier leads a Practice in Frenkendorf, Switzerland focussing on orthopaedics, back and pain therapy with specialisation in functional diagnostics (movement and pain diagnostics).

The most important information in brief

The puppy passport was created 12 years ago by Dr. Patrick Blättler Monnier. Since 2015 it has been further developed by the inclusion of kinematics. The target group are owners of Australian-Shepherd,Golden Retriever or Rottweiler puppies.