Many dogs suffer from a genetic predisposition to elbow or hip dysplasia. Veterinarian and chiropractor Patrick Blättler Monnier, from Frenkendorf, Switzerland has dedicated himself to the research and therapy of young dog diseases. 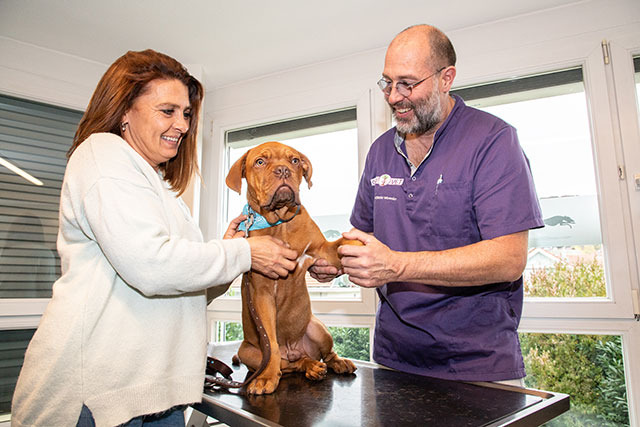 Before the kinetic measurement, Patrick Blättler Monnier examines the French Mastiff Jay Jay in the presence of the owner Margit Fernandez from Germany.

The French Mastiff puppy walks briskly on the pavement, nose in the wind, eyes wide awake. It’s cold on this grey winter morning. Raindrops drip from Jay Jay's nose and his reddish shimmering fur. While the male dog scans his new surroundings and stores the impressions in his memory for later recollections, six sensors placed at neuralgic points on the measuring vest meticulously register his movements and detect even the slightest deviation from his natural gait pattern.

Suddenly Jay Jay turns and looks up expectantly, directly into the eyes of her owner. "Well done, Jay Jay", Margit Fernandez from Rheinfelden, Germany praises her young dog, who is five months old and who, highly concentrated, first stood still for five seconds, then walked the planned 20 meters back and forth on the leash. That was really great", confirms Amrei Kolbaum, a qualified veterinary practice assistant, closes the tablet and lovingly ruffles the patient's head.

"The measurement was successful. Let's go back inside."

Jay Jay trots right up to the front door, where the Orthovet sign tells us that we are about to enter Patrick Blättler Monnier's practice in Frenkendorf, the only dog practice in Switzerland specializing in orthopaedics, as well as back and pain therapy. In 2007, the veterinarian developed the "puppy passport" in order to obtain research results for the early detection of deformities and congenital diseases.

A monitor hangs on the wall in the treatment room. Puppies jostle one another, and tumble about. Cut. Various recordings tell the resulting medical histories of dogs of various breeds. X-ray pictures and graphics document the severity of the injuries. Then again dogs playing. While Jay Jay looks around curiously, timidly wagging his tail, and Margit Fernandez watches the hustle and bustle on the screen with fascination, Patrick Blättler Monnier briskly enters the room, filling it with his energy and vitality.

"Good morning, Mrs Fernandez. Take a look... " Now the movement data just measured in the shoulder, pelvis and limb areas of Jay Jay flickers across the screen in diagrams. Worry lines spread over the face of the pet owner: "Jay Jay ran wildly in a clockwise direction in a circle. Suddenly he stopped and has been limping ever since". The orange dots on the diagram showed the values of a healthy dog, explains the vet.

No jumps, no wild play!

"The red, strongly deviating ones are therefore those of Jay Jay", the owner recognizes. "We are seeing an incorrect loading here. Your dog throws himself on the right front leg and takes more weight on the hind quarters", says the veterinarian. The problem is with his left elbow and it's good that she recognized the limp as an alarm signal so quickly. "We will manually reduce the pressure on the elbow, and then Jay Jay will be able to run again, without any long-term ill effects", explains the chiropractor reassuringly.

Meanwhile, Daniela Jenni, a qualified veterinary practice assistant, takes the control measurement with the customer and her Mastiff outside in the drizzle, the veterinarian types the detailed report:

"Coordinated puppy development / puppy passport, weeks 20 to 24", which he will give to the customer together with an anti-inflammatory ointment.

"The body mass index is optimal. Jay Jay has gained one kilo since last month", informs the veterinarian. Inflammatory signs are still visible, but the new movement values have been normalised as a result of the manipulation.

He advises: "No jerky movements or quick turns, no jumps. And in case of violent play, please intervene and calm him down. In this way you avoid new skeletal asymmetries and ensure healthy muscle development. And please control his weight gain. See you again in a month for kinetic-kinematic measurement."

Patrick Blättler Monnier strokes the patient's ears and laughs. Because Jay Jay is snoring away on the treatment table. His day was once again a single exciting adventure that has to be processed in his sleep. Margit Fernandez makes her way home satisfied with the dog in her arms. "That is the reason why I keep coming back here:
Here, thanks to the puppy pass, the foundation is laid for my pet's carefree future."

Depending on the breed, a puppy has a high proportion of elastic and malleable cartilaginous bone until the age of 7 or 9 months respectively. If a fall or wild play causes a pelvic obliquity and thus incorrect loading, a form-function disorder develops which - if left untreated - leaves permanent damage. Thus, not only the musculature develops unevenly due to limping or uneven walking, but the unhardened skeleton also deforms. Unfortunately, this often goes unnoticed by the naked eye for a long time.

In order to be able to treat the patient successfully, it is necessary to react immediately after an incident. So, the puppy passport provides for a first examination in the 12th week of life, followed at regular intervals by eight more until the puppy is 15 months old. Based on the results, a therapy and development scheme is put together.